On the evening of February 10, I, pfmosquito logged on and surveyed the situation for the allies.  My eyes fell upon the situation in the Namur river valley.  I bespied that we had a full division (2eme) bottle-necked in Namur and Andenne, with no route to engagement except to be thrown up against Huy.  2 Brigs were in Namur, and 2 Brigs were in Andenne.  The Namur brigs placed, certainly, to prevent an Axis movement north through Profondville.  The Axis had penetrated as far as Flavion, with three brigades stocked into the town.  See the images below for the situation as it unfolded. 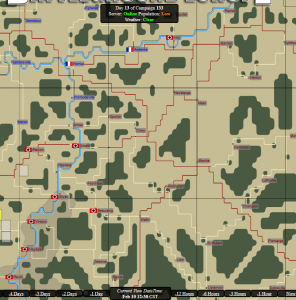 The Axis brigades in Flavion: 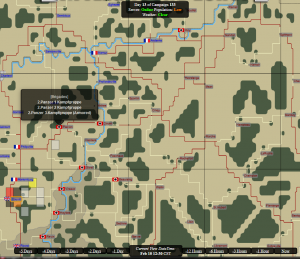 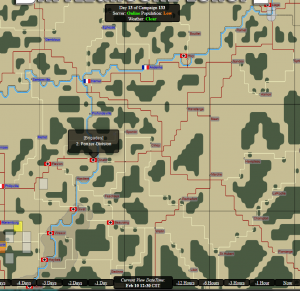 The Axis flag in Dinant was an HQ, which proves to be important as the matter unfolds.

The Allied brigades in Namur: 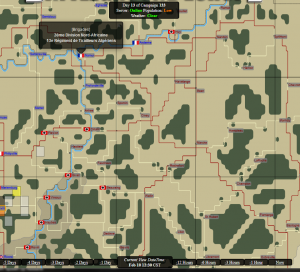 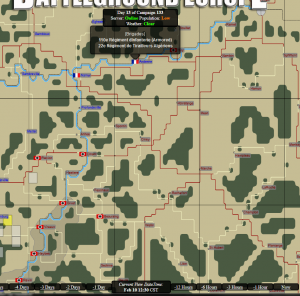 Seeing this situation, I pitched a ‘crazy’ idea to the HC who were logged on.  Birdman was MOIC.  Sgthenning was on.  FrackU was on. There may have been others, I don’t recall.

Here is what I pitched, and why:

We have a whole division effectively stuck with one option–press Huy.  Half of it are stuck in Namur, threatening nobody.  By moving just one brigade into Profoundville, that sets up an attack option on Anhee, which the Axis had left empty.  The downsides of such a move were minimal.  Our forces in Namur and Andenne could be easily supplemented by moving navy brigades into both of them.  *Probably* the Axis would see the movement of one brigade into Profondville and cover themselves by pulling back, putting a brigade into Anhee.  This in itself would be a ‘win’ as it would weaken their ability to press their attack from Flavion.  If, however, they did not act, and we took Anhee, we could throw their lines into disarray.  Merely having the brigade in Profondville essentially raised a cleaver over the throat of the Axis lines.  We didn’t have to act, but at the very least, every step of the way, by simply moving into Profondville, we’d upset their calculus and make them wonder what the hell we were thinking.

Birdman gave the go ahead to put the brig into Profondville with Henning and FrackU concurring it was at least worth seeing what would happen.

Once the brigade moved into Profondville, the Pathfinder squad moved to destroy the Axis forward base between Flavion and Anhee; this removed the Axis ability to spawn into Anhee from the Flavion depot.  (This idea was provided by Blackhawke, one of the Pathfinders.) The Pathfinders then destroyed the south rail bridge, so that the Axis spawning into the Dinant CP could not easily cross the river to defend their army base.  The Pathfinders put 50% damage on the main bridge, leaving it up just in case we ourselves decided we needed it.  At this time, the Pathfinders had two FMS set up in town.  One, northwest of the Army base at minimum distance of about 400m, overlooking the AB itself.  The other on the east side for attacking the east CPs.

The stage was set for an AO on Anhee, if the HC determined to go forward with it.   Right about that time, the Allies took Waremme, freeing up an AO.  The AO on Anhee was granted, and the game was on.

Since the Axis did not have the forward base from Flavion, they could not move in that direction.  They were forced to move in their HQ from Dinant, which they did before the radios were ‘hot.’

Flavion CP was quickly capped, and before long we had every CP capped except our own spawn (Profondville) and the AB itself.  Things bounced around a little bit, and it was hot and heavy for awhile, but with our FMS placement we could easily pour into the AB area and threaten both the bunker and our spawnable with (relatively) short time and risk.  The Axis eventually ran FMSes out, which threatened the Flavion CP, and they re-captured it and the Dinant CP.  But, by this time, the Pathfinder Dougyfarm capped our spawnable.  With the Axis HQ nearly attritted, Dougyfarm led an attack on the bunker, and booted the HQ from Anhee as well.  In the meantime, it is worth noting that FrackU diligently defended the Flavion CP, while Blackhawke led the defense of the east side of the river.  Pfmosquito and Snappled ran armor, with Snappled eventually switching to air support as 109s showed up (the Axis had little other option!).  Blakeh left in the middle of the attack as I recall, but had been instrumental in taking down the AI and the bridge in preparation for the attack.  These were all Pathfinders, showing what they do best–behind the scenes work that is usually thankless and unnoticed.

Not that they were alone in this attack.  B2K’s squad switched quickly to the attack after Waremme was subdued.  After a pitched battle, and an HE111 finally bringing down the main bridge (too late, because our armor was across by then for cutting the Dinant CP!) and taking down the Axis supply to virtually zero, the town was ours.

Granted, the battle turned out to be fiercer than I envisioned, the taking of the town effectively gave us the whole river valley… for free… as the Axis pulled back to cover the threat to Ciney.  They had to do this, because otherwise if the Allies took Ciney, the entire Axis underbelly would be exposed to the whims of Allied HC, whether they decided to thrust the knife north or south.  This was the state of the line when I checked it out about 1 p.m. CST on February 11th.  Note the Axis towns with the surrender flags: 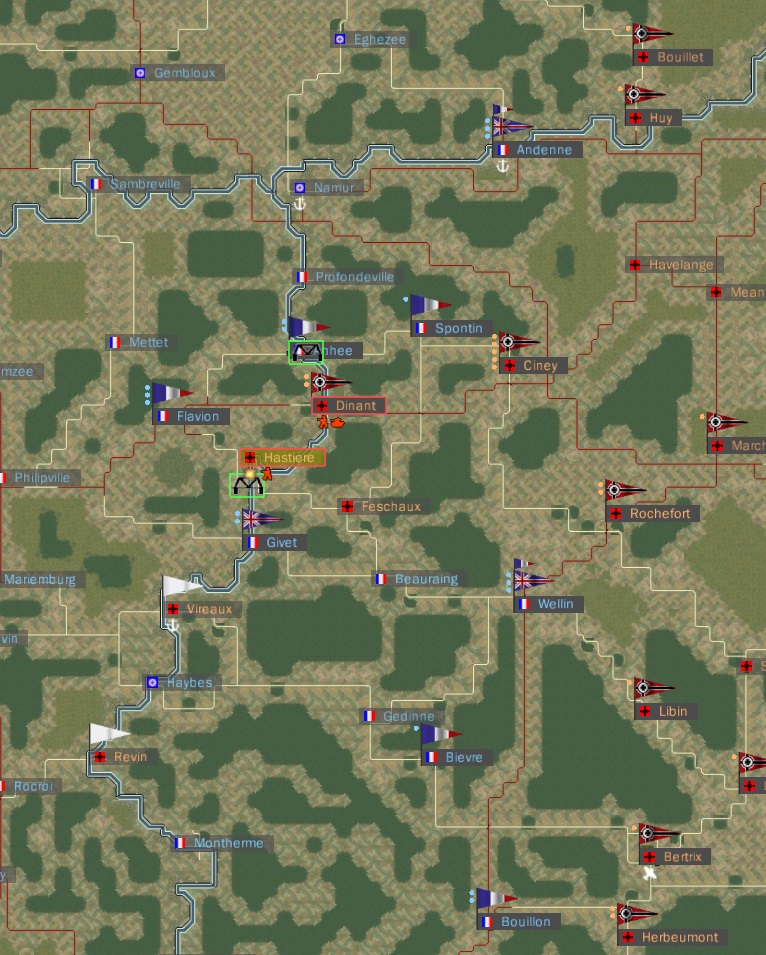 Not easily seen from this view is also the fact that the Axis had to re-deploy forces out of Huy, weakening their attack posture there, as well.

As of this writing, the Allies have also captured Hastiere.  The map looks like this: 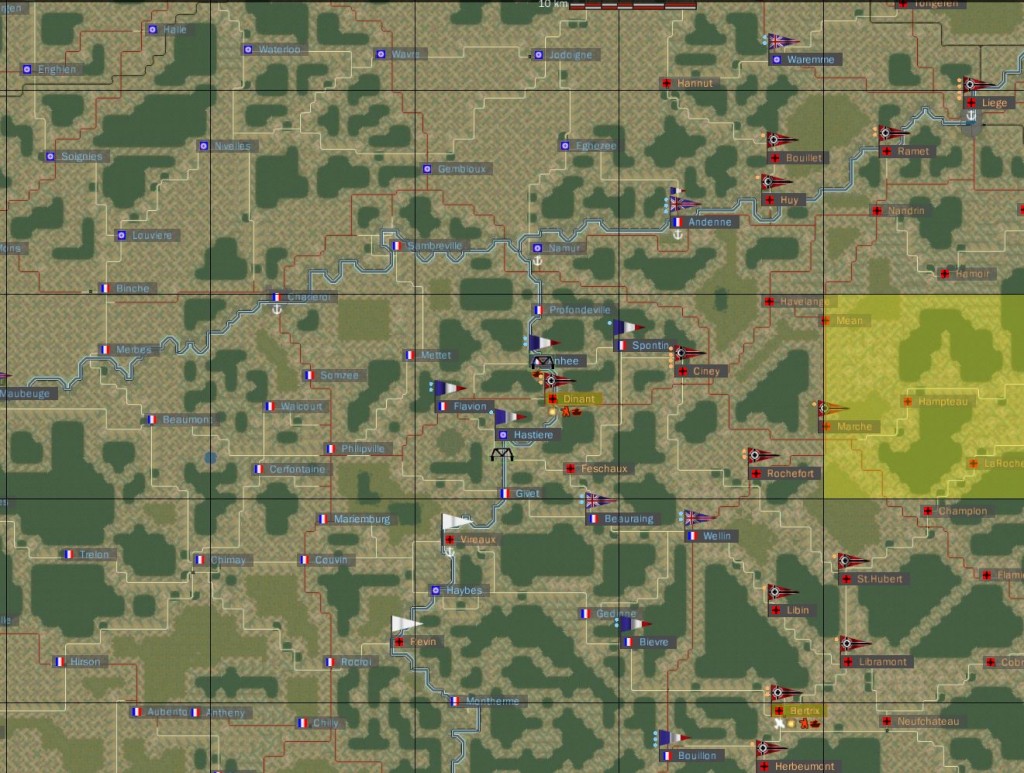 Compare how it was with how it is now (again, click on it to view larger): 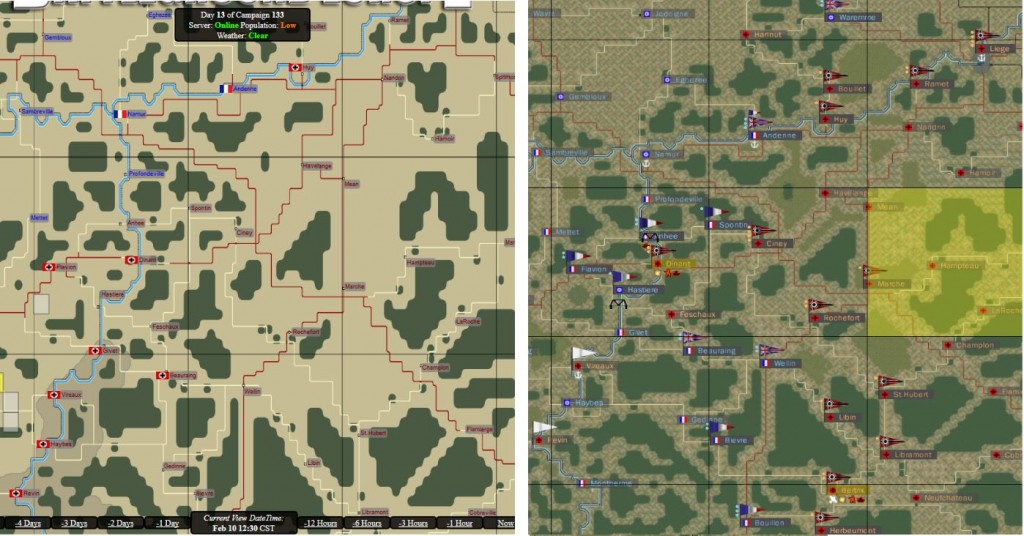 Not too bad for merely moving a brigade!

While I don’t know all the names involved, kudos have to go to the members of HC and the Allied forces who held down the fort during TZ3 which made this morning’s map possible.  Its clear to me that HC made a decision to press their advantage by taking Anhee.  They deserve credit for this, even if I don’t know who it was.  Furthermore, props should go to Birdman and Sgthenning for backing my play, and seeing that while the idea was ‘crazy,’ it had very little risk while having a great deal of possible reward, depending on what the Axis did.

Members of the Pathfinders really did a great job, here.  The battle to get the spawn raged and raged, but Dougyfarm slipped in unnoticed and pulled it off.  It was a turning point that made his assault on the bunker possible.  Blackhawke’s proactively placed FMS on the east side made our attack on that side possible.  We could not have gotten the east side with my FMS on the NW side alone.  And FrackU’s holding of the Flavion CP became crucial as the battle neared its end.  Congrats, men!